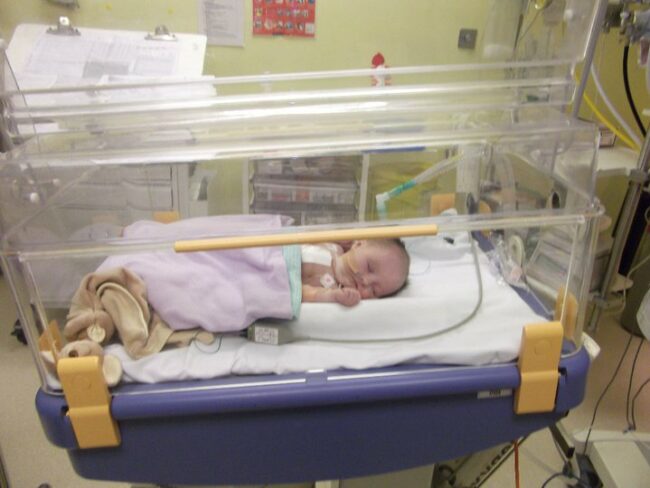 Baby Lagan was diagnosed with Complex Heart Defects in September 2010 during an intrauterine Fetal Medicine Scan at 22 weeks.

We were taken to a small counselling room and given our options.

Lagan was so active we agreed to give her the chance to prove her strength. On the 11th January 2011, Lagan was born in St Mary’s Hospital, Manchester, a brilliant 7lb 5oz. She was whisked away to NICU where she was looked after incredibly well. When we went to visit her we could not believe there was anything wrong she was perfect. But what we didn’t know was along with the complex defects we had been told about, Lagan also had an interrupted aorta type B. We were also told due to the interrupted arch that Lagan had a high chance of having Di-George Syndrome, they said she also presented soft features of this syndrome. 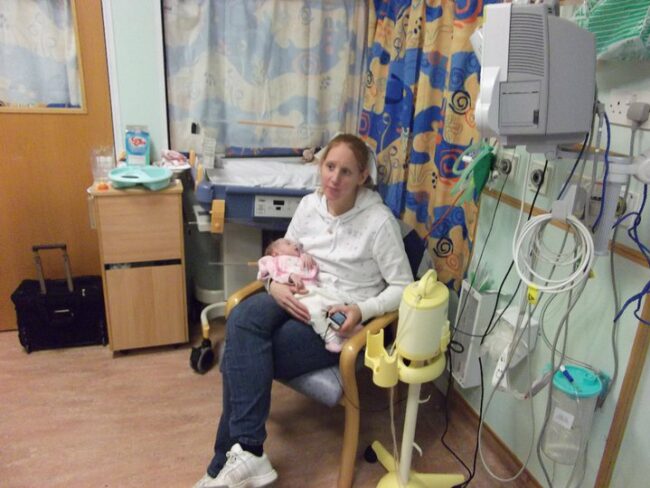 On the 12th January we were told they were going to transfer her by blue light to Alder Hey Children’s Hospital in Liverpool for surgical review.

That evening Lagan left the comfort of Saint Mary’s and embarked on her 30 minute journey to Alder Hey Children’s Hospital, Liverpool. I returned back to my room on Maternity and sobbed while we waited desperately to hear that Lagan had arrive safely in Alder Hey and had been transferred on to K2 Ward.

After a long 24 hours Lagan, her dad and I were reunited at 7pm on Thursday 13th  January. A long week passed and Lagan began to deteriorate throwing very odd blood gas results and rapid breathing. After a week of nil by mouth Lagan was just 6lb 2oz on the morning of her surgery.

Nelson Alfonso informed us that he would be performing the Modified Sano Norwood Stage 1 repair due to the stenosis in the aortic valve and area just below the aortic valve. He would also use a Gortex patch to repair the aortic artery. We were told that this was a risky procedure and due to Lagan’s frail state this posed even more risks. The estimated time the procedure was 6 – 10 hours and would take 2 hours to prepare Lagan for surgery in the anaesthetists area. We arrived on the ward at 7am after spending a restless night in McDonald House and sat with Lagan hoping these were not our last hours. The nurses began to prepare Lagan for her surgery, it was all too much for me and I was exhausted, I told Barry I could no longer cope and left Lagan in Barry’s arms. I returned back to Mac House and tried to sleep 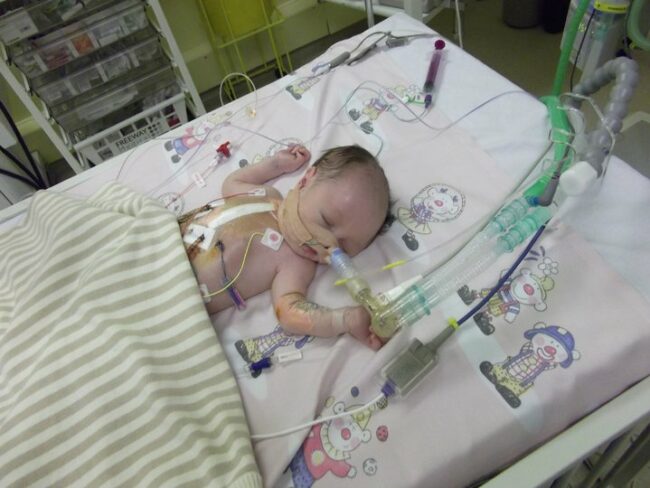 Barry returned to Mac house at 9am and immediately broke down. Were we going to get our beautiful little girl back? We could only hope.

My dad came over to Mac House to try to keep us comfort, he bought us lunch at a pub local to the hospital, I don’t think Barry or I had eaten for days…. surprisingly we ate what we ordered despite the emotional trauma we were going through. Because we kept our selves occupied the time didn’t drag too much. At 3pm my dad said he would drive home back to Bolton. Typically just 30 minutes after my dad left us we received our first call from anaesthetics to confirm Lagan had successfully come through her operation and had been taken to PICU. Just 3 minutes after receiving that call PICU rang to confirm she had arrived in PICU and we could go and see her.

We rush to PICU and saw Lagan immediately. I was prepared for the worst so just seeing her was a relief. She still had her chest open although this had been covered and the nurses had written a little note on a napkin to cover the wound saying “My Chest is Open” There were lots of noises and wires and pumps and the ventilator dominated her tiny face and had three huge drains hung from the bed. It was a lot to take in but we understood all of this was all helping our little girl. 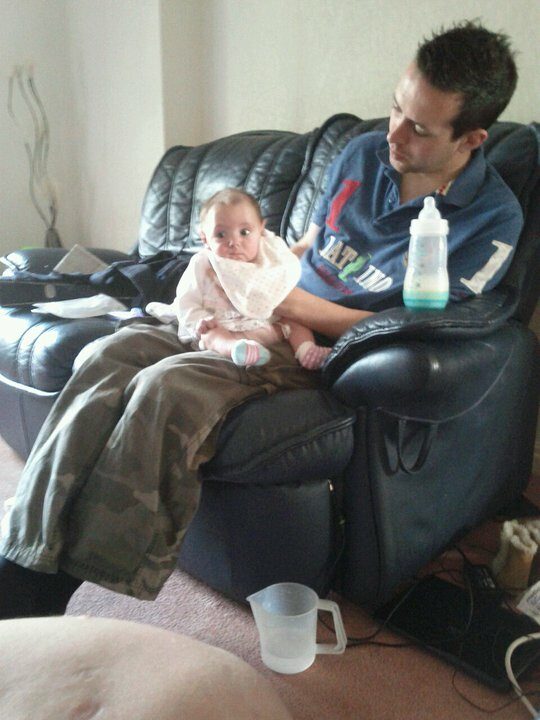 After 7 days Lagan finally came off the ventilator

This was probably the most stressful time as we had to will her to take over the job of breathing by herself again.

The same day Lagan was transferred back to K2 and started her long road to recovery. It became evident quite quickly Lagan couldn’t cry. Despite constantly asking why she could not cry we were told that it was just bruising from the vent and this would improve shortly, however it didn’t. One day one of the ST Doctors who had just returned from holiday, raised the alarm that she may have had vocal chord damage due to the operation. Something that had not been discussed with us as a possibility. Immediately, Lagan was placed as nil by mouth again and a Nasal Gastric (NG) tube placed to minimise any chance of aspirating should the vocal chord indeed be damaged.

After investigation it was confirmed, Lagan had left vocal chord damage. We were unsure if this would be permanent. But for now she could only be fed via the tube. Up to this point Lagan had been breast feeding. I was devastated.

Lagan’s voice slowly grew and we were moved on to thickened fluid to allow her to feed orally. During this time of adjustment we were told Lagan did not have Di-Georges. Relief passed over us.

Eventually after 6 more weeks we were discharged. 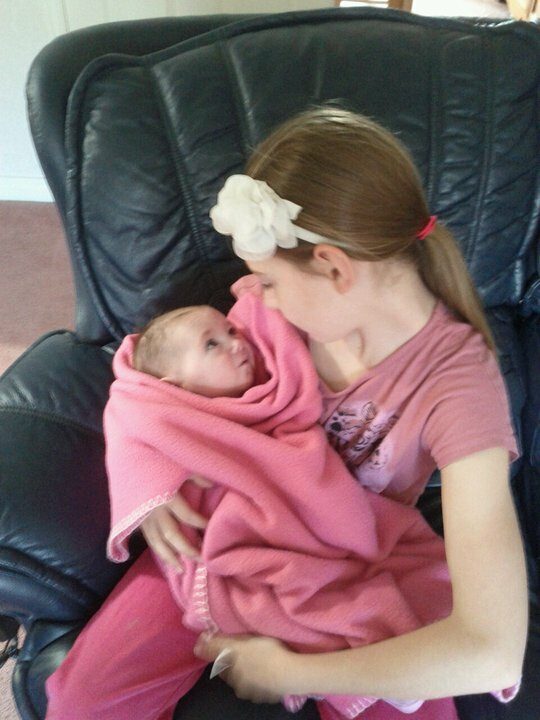 We arrived home early afternoon and waited for everyone to return home from school and work. Everyone was so happy.

This was to be short lived, just three days at home Lagan woke up in the middle of the night with breathing difficulties. We immediately rang 999. She was taken to Royal Bolton Hospital and treated for RSV. Tests confirmed she did not have RSV but everyone played it safe. After 3 more days there we were discharged and went to Alder Hey to attend the Cardiac / Feeding Clinic, where surprisingly Lagan was readmitted. I was completely unprepared and had no clothes, milk etc. Mark Dalzell the Gastroenterologist decided Lagan required a PEG. She was failing to thrive. The operation was done the next day and only took 20 minutes. Amazingly after that Lagan began to pile on the weight. I hated using it but knew it was the best thing for her. A couple of days later Lagan was discharged. We had to return to clinic in 2 weeks.

Two weeks passed and Lagan’s reflux began to get worse and worse. At home I panicked, I had no one who could advise me. Was this normal? Were we feeding her too much? Etc? No one could help me. We return to clinic and the Gastro team readmitted us to observe the reflux. They changed her medications and eventually after a fight they discharged her. Alder Hey only wanted the very best for Lagan.

Life got more and more difficult. The reflux took over our feeding regime. I hated being out of the house too long and therefore found myself house bound. Lagan was fed every 3 hours and each feed would take an hour and then I would have to sit quietly with her for an hour leaving one hour free to prepare for the next feed. Was this my life now? Everything had been turned upside down!

Unknown to me, Lagan was supposed to have a paediatric community nurse visit her weekly. The only time we received a visit was after each discharge from hospital. I now feel extremely let down by the community team as they could have alerted me to things to come.

Easter approached, and on the Friday Lagan just didn’t seem herself. She had not long since had her 1st injection and I just thought she was under the weather from this. On the Saturday she was very clingy and cried quite a lot. I just couldn’t work out what was wrong and put her on long feeds and gave her lots of cuddles. Easter Sunday arrived and so did all the family. She still seemed out of sorts but not quite as bad. Lagan received lots of nice clothes instead of chocolate and a lovely day was had by all. 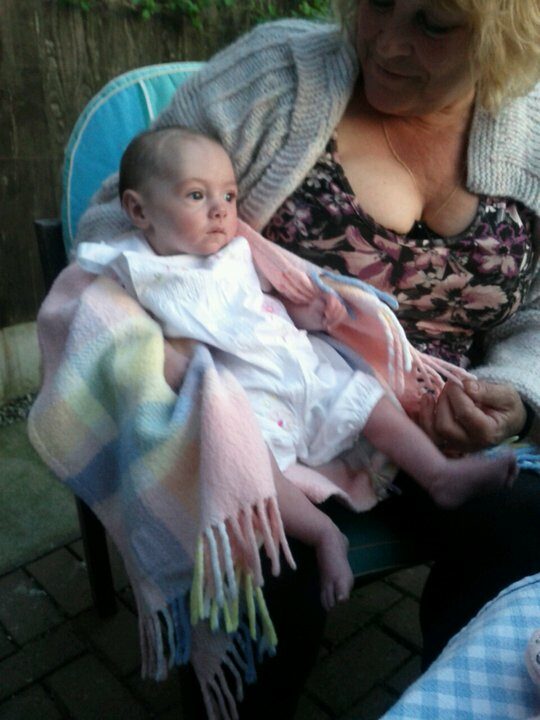 On Easter Monday we had another visit from friends and again Lagan was still a little off!

She slept quite well and took her milk via the PEG only. At midnight it was time for her final feed. We were all shattered. I lay in bed with her on my chest and she took her milk without a problem and slept through it all (Something I wonder about now. Had this been a serious sign I missed?). I placed her in bed and she seemed so content. Exactly 1 hour from the finish of the feed at 2.30am Lagan woke up with the most terrifying scream. She was inconsolable. We thought she had nappy rash? No, Colic? No. And quite quickly she started showing signs of respiratory distress. I took Lagan downstairs and rang 999. They arrived in 8 minutes and rushed us towards the Royal Bolton Hospital. We arrived at the hospital at about 3.10am. Unfortunately, whilst on the ambulance Lagan crashed and the paramedic commenced CPR. Something I had always dreaded.

After 30 long minutes the medical team worked on Lagan solidly desperately hoping something would work and sadly at 3.41am on the 26th April 2011 Lagan was pronounced dead. She had gained her wings in the most distressing way. 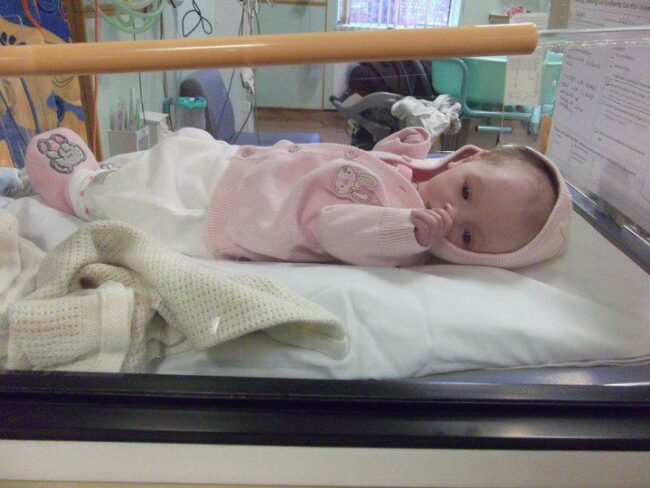 Was she presenting signs of heart failure? Was I labelled as a paranoid parent and due to all the funny looks and lack of support became frightened of taking her to our local hospital? All questions that just will never be answered.

No parent deserves to go through that and therefore Lagan’s Foundation was born.

I vow to bring to parents the information they ask for, the support at home they need and the sensitivity and passion every heart parent has.

Our story is tough but true. I hope through Lagan’s Foundation, Lagan will be remembered and many more people will be helped.